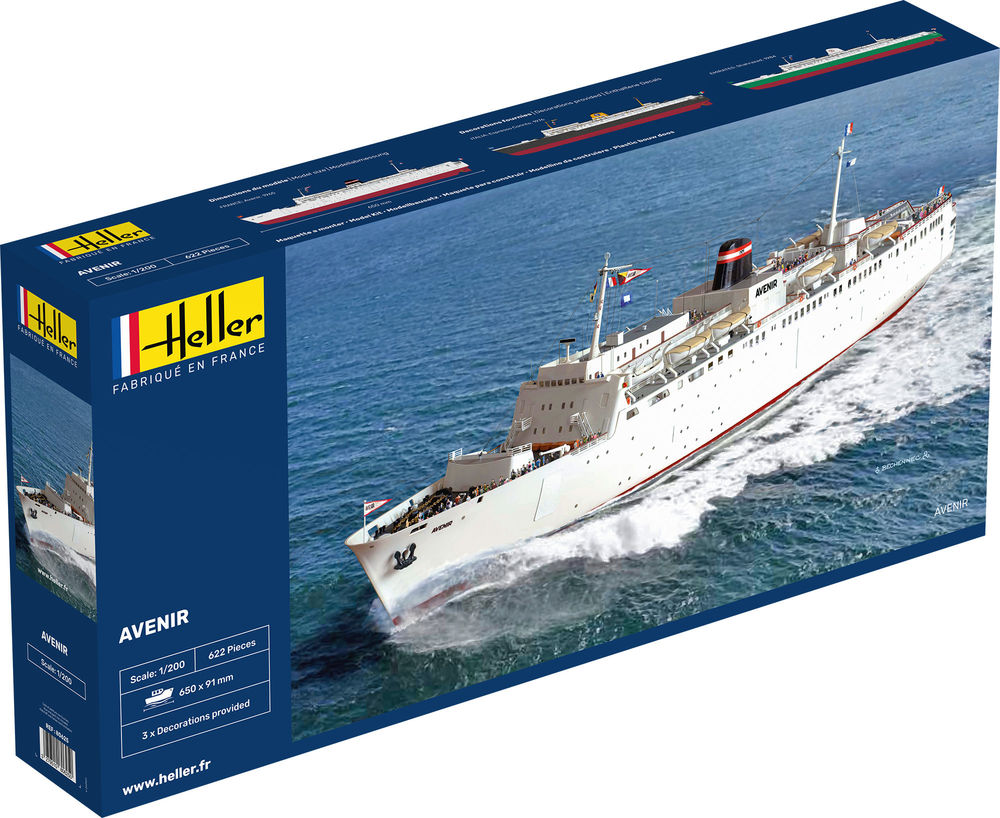 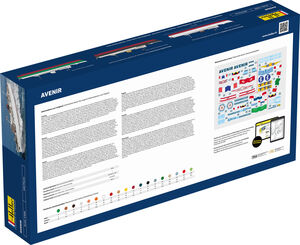 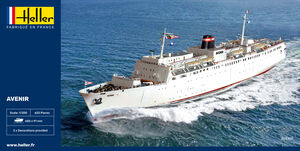 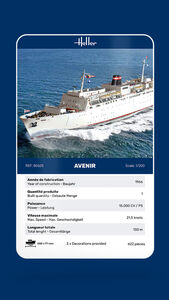 
From the 1960s onwards, car ferries became widespread in the Mediterranean.
In early 1965, the Marseille-based Compagnie de Navigation Mixte ordered a car ferry from Forges
et Chantiers de la Méditerranée in La Seyne-sur-Mer. The Avenir was their first car ferry and the last
vessel ordered by the company.
Commissioned on 4 November 1965, the Avenir was launched on 21 June 1966 and delivered to the
"Mixte" on 25 March 1967 (IMO- International Maritime Organisation-6614815).
An excerpt from the official launch in 1967: "Designed today for the tourism of tomorrow, the Avenir is
a true luxury ferry with the highest level of comfort. But she is also a car ferry: the modern traveller,
who is no longer to be found without his car, drives straight in".
The ship was fully airconditioned and could accommodate 918 passengers (376 in passenger class,
364 in seats and 178 in dormitories). It had space for 130 vehicles to enter the ship through a 2.60 m
high tailgate or through six side doors (110 vehicles in the "garage" and 20 vehicles in the hold). Cabin
Class passengers had access to a 200 seat dining room, two lounges, one with a dance floor, a Lido
Bar with swimming pool, a shop and a TV screen. Passengers in Economy Class benefited from a bar
and a brasserie with a TV screen.
Avenir's inaugural voyage to the Balearics and Tunis took place from 14 to 17 April. On 18 April she
made her first commercial voyage from Marseille to Tunis. On 1 July 1969, the Avenir was transferred
to the Compagnie Générale TransMéditerranéenne (CGTM) as part of the merger of the Compagnie
de Navigation Mixte and the Mediterranean services of the Compagnie Générale Transatlantique. The
Avenir, which operated between France, Algeria and Tunisia, arrived in Marseille for the last time in
October 1975, where she was decommissioned and put up for sale. The ship was sold in January 1976
to the Italian company Trans Tirreno Express, which operated it under the name ESPRESSO CORINTO
between Italy and Greece. The home port at that time was Cagliari.
The ship was decommissioned in 1981 due to TTE's financial difficulties and lay derelict for almost
three years before being bought by the Panamanian company Marinvest Founds in 1984. Renamed
SHAHRAZAD, it served to transport Muslim pilgrims to the Red Sea. On 21
September 1985, her career ended when she sank near Jeddah after being destroyed by fire.