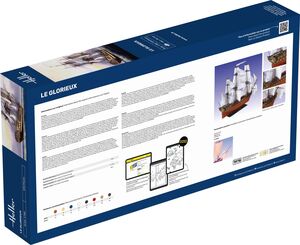 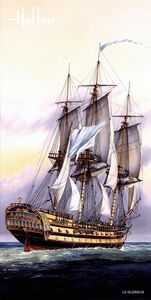 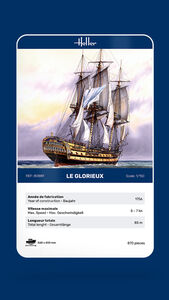 This ship was built during the reign of Louis XV. It was built in Rochefort in 1756 according to the plans of Clairin-Deslaupiers. Listed among the 74-gun vessels, it has the particularity of having a copper-lined hull. This practice of lining became widespread much later, from 1770 onwards. It allowed the hull, and in particular the hull itself, not to be attacked by worms and other parasites. The GLORIEUX is equipped with 74 guns distributed as follows: 28 guns of 36 pounds on the deck of the 1st battery, 30 guns of 18 pounds on the deck of the 2nd battery and 16 guns of 8 pounds on the forecastle. Like all 74-gun vessels, the GLORIEUX did not have a mantelet on the second battery. Like all ships built at the beginning of the 18th century, the GLORIEUX had a castle topped with a rounded top. In 1779, she was one of the ships that made up the Comte d‘Estaing‘s Wing, also known as the Wing of America. It was part of the Blue Squadron, whose flagship was the Admiral‘s ship „La COURONNE“.